When you come from a town of 25,000+ people, vegan cuisine isn't exactly the food hot topic. Lucky for me, between staying in Blue Mountain this past weekend (which I documented in pictures) and taking a two day trip to the Cleveland area for the hubby to play in a golf qualifier, I got to experience some amazing vegan option I may have otherwise missed! And boy, would my taste buds have been disappointed!

I want to, first, go back to my pictures from the weekend. Since I was blogging from my phone last post, I didn't get a chance to do any link ups that actually really deserved them. So, first things first, my vegan experience while in Collingwood (aka where Blue Mountain is).

If I could marry a vegan restaurant, it would probably be the one from the weekend - Pure Food Bar. The husband and I ate our two out of three dinners from there, along with smoothie and dessert purchases. Like I said last post, we pretty bought the place last weekend.

If you are EVER in Collingwood, you NEED to try the Truffle Pasta; it's pricey, but so worth it. 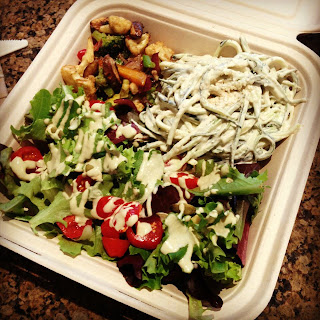 I can't even describe how friggen fantastic it was. The flavours were like fireworks in my mouth. I don't want to ever overhype a meal (ahem, husband), but this is up there on my 'need to talk about it' foods!

Apart from this dinner, I also tried the taco wrap, and it was delish as well. What amazed me about this place, is it's not just vegan, but raw vegan. 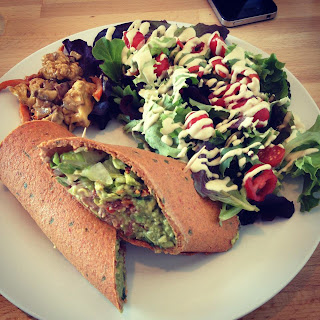 I loved the dressing on the salad, too. I wish I was a talented vegan and could whip up these amazing things...especially salad dressings!

Ok, so after we left Collingwood and headed back home on Sunday, as soon as early Monday morning rolled around, we were back on the road, this time heading to Ohio.

The husband had already prepared me, telling me that there was a Trader Joe's close to where our hotel was. I had never been to TJ's before so you can just imagine how excited I was. I think we made 4 trips there in the 1.5 days we actually had time to go places other than the golf course.

You can see that I was obsessed from the start.

The big hit for me from there was the hummus and veggie wrap. I'm pretty sure I'm not alone when I say that their hummus has crack in it. It was so good; I couldn't get enough! 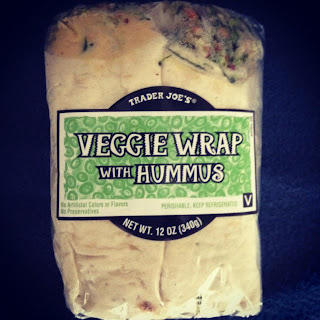 It was the afternoon snack we need after a 5 hour car ride!

Then, after the husband played some holes on the golf course to get him ready for the tournament the next day, we hit up Chipotle Mexican Grill. As I was walking around the golf course, I went on to their website and checked what their vegan options were. Luckily, they clearly specify on their website which are vegan friendly, so that made it super easy when I went it because I already knew what I was going to order.

I got the burrito bowl with brown rice and black beans, then of course hot salsa, mild salsa, lettuce, grilled veggies, corn and guac. 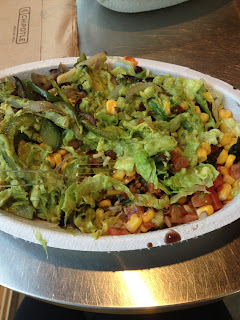 It was so good and so filling. I actually took some home and snacked on later once we were in the hotel room. Definitely will be going back there again!

As if I wasn't already on the top of my vegan streak, it got mighty better the next day - I found a vegan bakery. They had me at 'Vegan Sweet Tooth.'

Going in, I told the husband that I wasn't just getting one cupcake, but at least 4, and 4 is what I got...along with a slice of strawberry cheesecake. Yes, I have a problem. 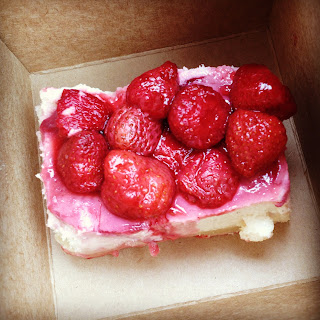 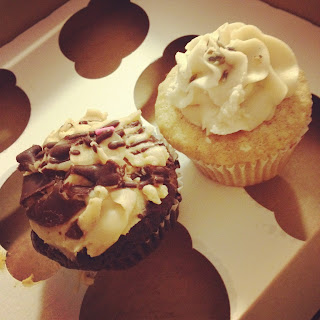 You probably are wondering why if I got 4 cupcakes are there only 2 in the picture...well, you see...we kinda got right into those cupcakes after the hubby finished his golf tourney, and with cupcakes in the room, my memory for taking pictures goes out the window!

I'm normally a vanilla girl (we got 2 different vanilla ones, and 2 different chocolate ones), but here, their chocolate cupcakes were much more moist than the vanilla and just full of flavour!

Either way, vegan cupcakes in general is a win in my book!

And finally, one last win in my vegan streak. Remember the vegan place up in Collingwood? Well when we got our last dinner from there, I had asked if they would mind giving me some extra vegan sour cream on the side as I really wanted to steal some...and they kindly agreed to it.

So last night, I used that lovely vegan sour cream on a glorious baked potato and it was amazing. I think I need to go up to Collingwood more often, spend all my money at Pure and ask for more sides of sour cream. 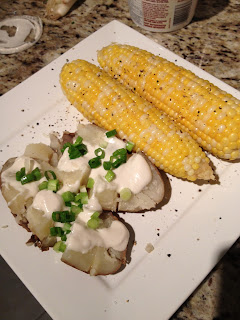 It's sad that my vegan streak ends there, or simply means I need to keep traveling, and I like the latter so much better!